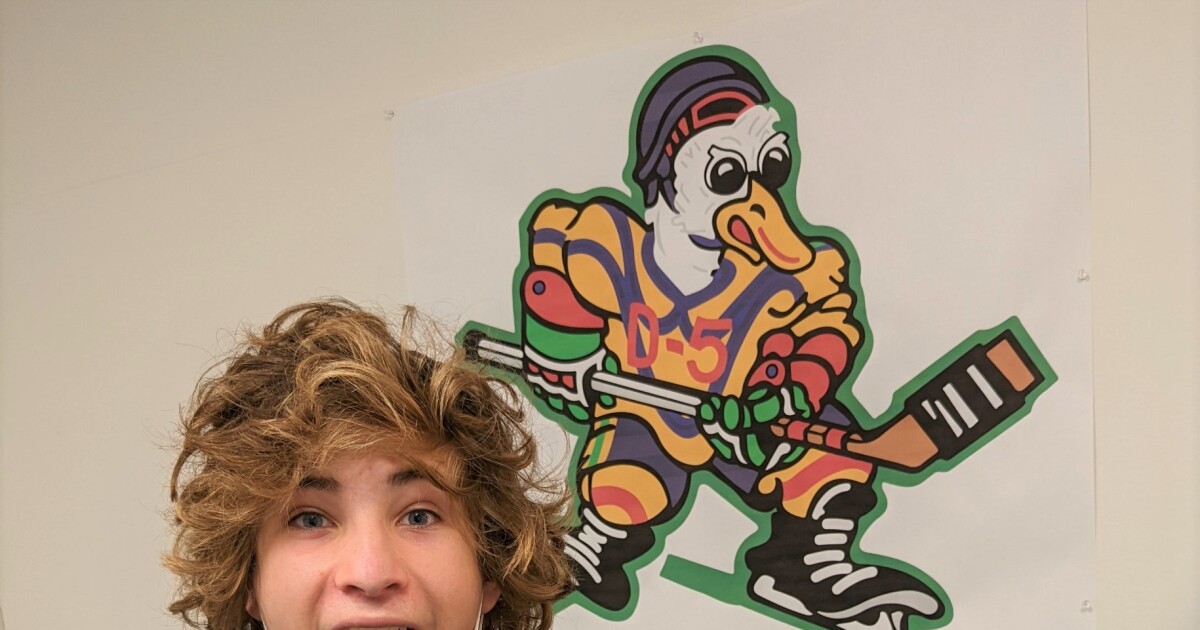 Noah Baird had just completed a first-period test last March when his mother showed up at his high school in Carlsbad to take him out of class to an ice rink in Mira Mesa.

This was his encore audition for season 2 of “The Mighty Ducks – Game Changers”, a Disney-branded television series, produced by ABC Signature. His parents needed to make a video of him skating, and there was no time to waste.

Noah had previously read for the role of the hockey camp star’s little brother.

It didn’t matter that the Southern California surfer had never played hockey. It hasn’t been a game-changer for him because, in addition to surfing, he dances, skateboards, snowboards and does other sports that require agility and balance.

His family submitted the skating video and two days later Noah learned he had gotten the part.

Producers gave him a week to move to the Santa Clarita film set, where he took a “crash” course to play hockey. He had to learn the game in two-hour sessions spread over two weeks.

Such is the life of an actor – and 16-year-old Noah has been one since he was 4 years old.

He appeared in the Broadway show, “Matilda the Musical,” and a New York production of “A Christmas Story: The Musical,” in which he played star character Ralphie Parker’s annoying brother, who lusted after a shotgun. Red Ryder compressed air.

He co-starred on Fox TV’s one-night show, “A Christmas Story: Live” in 2017. And he appeared as young Tommy in the 2019 La Jolla Playhouse One-Night Benefit Concert. of “The Who’s Tommy”, a musical that originated at the Playhouse. And these are just a few of his shows.

His agent in Los Angeles, Domina Holbeck, says Noah is marketable because of his confidence, charisma and willingness to put in the work. “This industry is very competitive and he works hard at his craft,” says Holbeck.

Noah’s mother, Becky Baird, admits family sacrifices have been made – adjusting work schedules, canceling events, postponing family trips and calling on extended family and friends for last-minute help. But it led to cross-country family adventures and many new friends.

Noah loves acting, but the one aspect of acting that doesn’t interest him is the unpredictability of his life. “It completely interrupts everything. You put every part of your life on hold in seconds to do so.

He auditions several times a week. But when the role of “Mighty Ducks” emerged, he had to put aside normalcy and scramble to work out a new class schedule with his teachers, put sports and other activities on hold (including missing a surfing competition of State) and hastily make living arrangements. in the LA area.

His mother, a youth theater manager and freelance musical theater coach, and his father, a web architect for Paramount Streaming’s Pluto TV, fully support him. But it gets harder, not easier, now that Noah heads into Grade 11 at Sage Creek High School with more advanced classes and longer homework.

On set, he was given three hours to cram in a full day of classes, including homework.

When Noah was interviewed by my UT colleague Pam Kragen in 2017, he said gaming would always be a part of his life, but he dreamed of a career as a professional surfer, chemist, or race car designer.

Five years later, Noah is focusing on a career in science, particularly biochemistry and molecular biology. His grandfather, Stephen Baird, is a professor emeritus of pathology at UC San Diego, and this summer Noah observed research involving bacteria and transport proteins in a molecular lab at UCSD.

He plans to attend a college with a strong biochemistry and molecular biology program.

“Being a professional actor is a very inconsistent job. Most actors do secondary work. I want something that I can be happy doing every day,” he explains.

When I spoke to the actor, who turns 17 in December, he was about to vacation in Hawaii, a rare treat for a kid with a whirlwind work schedule.

In his free time, he says he enjoys watching TV shows, such as Netflix’s “Zach Stone is Gonna’ be Famous,” “Stranger Things,” and shows his friends play just to see them play.

“Stranger Things” is one. He appeared with some of the cast members or their siblings, and they became a close-knit acting family.

Mitchell Sink, the brother of Sadie Sink who plays Max in “Stranger Things”, starred with him in “A Christmas Story”. And he was in “Matilda the Musical” with Gabriella Pizzolo, who plays Susie, the girlfriend of “Stranger Things” main character Dustin.

Filming has wrapped on “Mighty Ducks – Game Changers,” which debuts Sept. 28 on the Disney+ streaming network, with Josh Duhamel as coach, replacing Season 1’s Emilio Estevez. Noah’s character is dubbed “Fries because his brother, a self-assured and arrogant hockey player, is the main course, and the fries are just a side dish.

“We hope there will be a season 3 and of course we would like ‘Fries’ to be included,” Noah’s mother said. “But we won’t know until season 2 airs.”

For now, however, Noah says applying to college is his main focus.

Despite his heady hobby, he manages to keep things in perspective.

His advice: “Always be grateful for what you have right now. Be grateful for the opportunities you get. Don’t take them for granted because who knows how long you’ll have them. And respect the people around you.

These are broad outlines.