Glad to hear that – Newsroom 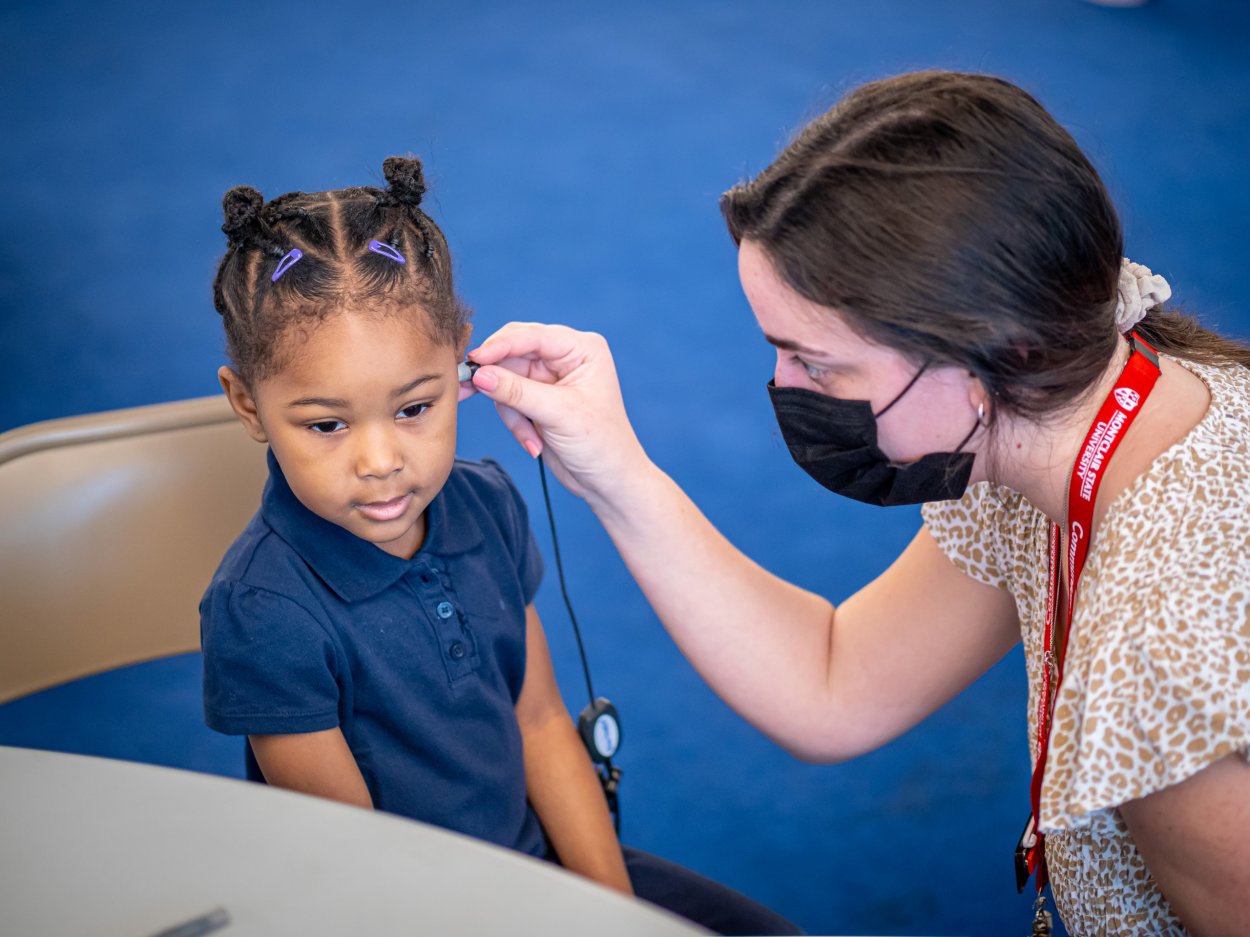 Glad to hear that – Newsroom

Skylah, a kindergarten student at a school run by The Leaguers, Inc. in Roselle, holds a paper cookie to her left ear. She wears headphones attached to one of the portable audiometers that Montclair State University students and faculty brought to school. Hearing a beep, the three-year-old gives the cookie to Quinley, the mouse from the children’s book If you give a mouse a cookieas instructed by Gita Balser, a second-year audiology student at Montclair.

Nearby, first-year audiology student Grace Gleba struggles to get a 4-year-old boy to play a similar game while checking his hearing. “If you hear a beep, throw the bag of beans in the bucket, okay? Gleba instructed him.

Jowel holds the beanbag to his left ear. But after the beep, nothing.

“Was it that ear or that ear?” Gleba asks, pointing to the red and blue headphones he’s wearing. He points to one ear, then the other. Faith Mogila, director of the audiology clinic, steps in to help, daring the boy to beat her by throwing the bean bag into the bucket. They continue to work with him, eventually determining that he can hear, he’s just kind of shy. Jowel goes for an otoscopy with first-year audiology student Max St. Germain.

In total, that day, about forty children from Roselle will undergo a hearing screening using an audiometer and a visual examination of the ear using an otoscope. Additionally, they will undergo an otoacoustic emission test, which involves placing a tiny device in the ear that emits sound and records an echo, measuring cochlear function. It is commonly used with babies and young children because it does not require a behavioral response from them.

The four Montclair students in Roselle are among 13 doctoral students in audiology sent to three Early Head Start and Head Start programs run by The Leaguers, New Jersey’s oldest African-American social service agency. The non-profit organization provides services to 1,700 low-income families in Essex and Union counties. Hearing screenings, part of a partnership with the New Jersey Department of Health’s Early Hearing Detection and Intervention, provide a public service and give audiology students hands-on experience. Audiology students from the University’s Department of Communication Sciences and Disorders will also provide hearing screenings to athletes participating in the New Jersey Special Olympics Summer Games in Ewing Township in mid-June.

That day, screenings also take place in Irvington and Newark – on the same day, news of Mattel’s release of a new Barbie with hearing aids was making the rounds with students. The activities used in the screenings aim to make the assessments more entertaining and less frightening for children. Audiology students were challenged to come up with new age-appropriate activities that could be used to condition a 3-5 year old. Gleba’s idea for the mouse and cookie activity, sparked by a trip to her mother’s basement where her mother still keeps all of her childhood toys, was approved for use. In fact, it was her stuffed mouse that was used at Roselle’s school. At The Leaguers School in Newark, five Montclair students used toy elephants and building blocks to engage children.

Second-year audiology student Sean Kleczkowski performs his first screening of young children in a preschool setting. “It’s really important to get their hearing screened because they may lack learning in the classroom and not even know it,” says Kleczkowski.

Although children are screened as newborns, as required by law, hearing problems can still develop. “They might have a late start [or progressive] hearing loss,” says Kleczkowski. “Incidents of hearing loss can double between birth and age 6, so it’s crucial that we get these screenings done.”

Ivonne Jaramillo, health and nutrition specialist at The Leaguers, said she and other specialists usually visit schools to do hearing and vision screenings at the start of the school year, as required. school, but having additional follow-up screening is also good. “It’s important because we want early intervention,” says Jaramillo. “Not being able to hear could interfere with school productivity.”

Kindergarten teacher Mariam Gonzales watches the proceedings as some of her preschoolers are tested while others wait their turn. She is optimistic that they will pass the screening. “I had no problem with them not hearing me in class,” she says.

Parents, who have given their consent for the screenings, will receive letters explaining their children’s results. Any student who does not pass the screening will be referred to their pediatrician and an audiologist in their area. Parents of all children tested will also receive literature explaining the importance of the screening and the signs of normal speech and language development.

As part of the Leaguers’ Early Head Start and Head Start programs in downtown Newark, Vanessa Coppola, a first-year audiology student, said she loved testing kids: “It was a lot of kids and a lot of experience in screening children.” Some, she says, will need follow-up testing.

While Balser, sophomore Cindy Fernandez, and third-year student Rosie Ovadia had tested young children before, more often than not these screenings are the first opportunity for Montclair audiology students to screen children, said Mogila.

At the Montclair Audiology Clinic, students work primarily with adults who are in a soundproof booth. At the Newark school, “it was interesting,” says Nicole Genser, a first-year student. “We had to think about the best way to put all this in place in terms of environment and noise. The kids were great.

Professor Joan Besing, director of graduate clinical programs in the Department of Communication Sciences and Disorders, says attending the schools sometimes offers Montclair students new experiences. “There were students who had tubes in their ears, our students had never seen this before. This provides them with hands-on experience so they become more comfortable. »

There is also the added benefit of giving back while learning. “It’s really rewarding to be able to do screenings for your community,” Fernandez says. “We apply our knowledge for the greater good.”

To learn more about the Doctor of Audiology program, visit Audiology.