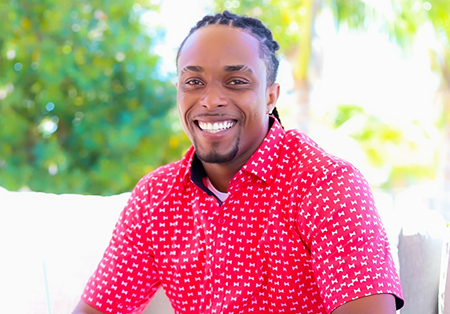 Jugdeese, a 28-year-old Jamaican national who has lived here most of his life, is a dedicated, hardworking and inspiring young man who wants to make a difference in the community.

“I want young people in the Turks and Caicos Islands to get up, get going and work on their future. I officially launched the concierge company in October 2020 just as COVID-19 hit TCI. COVID didn’t really break me, it built me. The bigger my business grows and the more I can publicize it, the more people there are to hire. I want my business to be a legacy for the Turks and Caicos Islands, but also a walking living directory and information box,” he said in an interview with The SUN.

“I started my business without a dollar. I got away with being a friendly, outgoing person. Everyone has talent, but some people doubt themselves and think they can’t do it, but you have to get up and go out to make a difference or a mark for yourself. Young people should stop the violence and come out and hustle and the older generation should watch over the young people and help them in any way they can. I watch everyone around me grow doing good and bad, but it was me who sat back and tried to motivate everyone and inspire others. I am a very versatile and practical person when it comes to anything.

Jugdeese said the Turks and Caicos Islands need to invest in a trade school, especially for children/young people coming out of high school with nothing to do.

“Growing up I went into the business of doing everything, like making toy boats… Deejaying was a passion of mine and I tried for a year or two and quit, then I went into bodywork and that’s what convinced me that I’m a very skilled man growing up. I want to create entertainment, connect the outside world with the Turks and Caicos brand. Turks and Caicos is a hidden, beautiful (country) by nature and with the best beach in the world and everyone likes to come here,” he said.

Jugdeese added: “I decided to do concierge work because when you look at the whole country it’s a tourist destination and I decided to do it for the people because I dedicate my life to the people and to make people happy and want to come back to the I went to concierge to plan guest vacations because it gives me motivation in life because in 2019 when I found out my mom had Cancer, it took a bit of a toll on my life and I said I wanted to be a person who motivates young people in the Turks and Caicos Islands. Losing my mother, I found happiness in meeting foreigners and they encouraged me. gave the motivation to uplift me and uplift my emotions.

Jugdeese noted that due to his concierge company and meeting so many people, he decided to branch out into entertainment.

“People ask me how I do it and I say it’s easy. If I have a group of 20 guests coming I would listen to their vacation plan and then rebuild it for them and have them support all the local spots on the island and also throw a party. It’s about supporting local businesses and a lot of people don’t do it that way. There are a lot of things there that I hope young people in the Turks and Caicos Islands will pick up and get into tourism. Looking at Turks and Caicos now and looking at Turks and Caicos in the next ten years will not be the same. I’m not saying I make a fortune, because as I earn it, I put it back into the business by promoting and to elevate the business. As soon as I reach my goals and the business is at a certain level, my doors open and I only hire locals,” he said.

Jugdeese said he wants to see everyone succeed and do well, but people need to know that they have to go out there and work hard to get what they want in life.