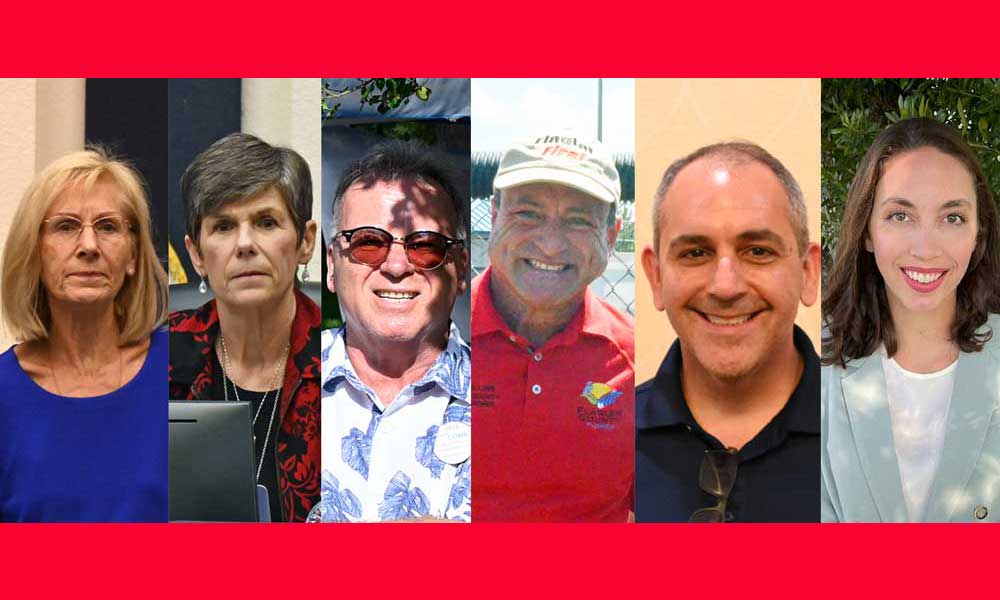 The cops love to call the local junkies they round up “poison sellers.” But a two-bit drug you’ll never hear from again is nothing compared to the poison peddlers of politics who run campaigns and get elected while trafficking lies, bigotry and ideological toxins long enough to ruin lives and smear communities before their lies catch up to them — before our notoriously comatose electorate comes back to life long enough to vote them out.

So it was with three of our most noxious poison peddlers in this primary election: Joe Mullins, Jill Woolbright and Janet McDonald. Flagler County has yet to give up the ghost. It is also not free of hawkers.

But that’s the exception, not the rule, and it only happens when the electorate is deceived, as it was when Mullins and Woolbright were elected. That was less the case when McDonald regained her seat on the school board four years ago because she had done a great job playing Jekyll at her Hyde in her first term. It all ended when she became mullah on the board, bringing out preachers and prayer bongs before going crazy for Qanon during the Covid pandemic and doubling down with Woolbright’s Comstockery. I just hope we haven’t traded one deception for another with a few new candidates.

This has nothing to do with a Liberal complaint against the Conservatives, because it is not a Liberal-Conservative dichotomy at all. We are in a conservative riding. It’s a given, and it’s not about to change. It’s also irrelevant. If Flagler is solidly conservative, he remains reasonably, moderately so for now, even for a one-party county with just three Democrats among 33 elected to six government boards, plus the five (all-Republican) Constitutionalists (court clerk, the tax collector, the election supervisor, the real estate assessor and the sheriff).

Look at most of those 32 members (one seat on the Bunnell commission is vacant). They work hard, debate hard, stick to the daily local issues that matter and the cancers of ideology and piety at the door (except for those irritating but harmless prayers at the start of Bunnell’s meetings and the county). They might as well be their own Rotary: but for diversity, they respect the principles of Rotary.

Sure, there are disagreements, the occasional public outrage, even a few dumpster fires from time to time (see under “Flagler Beach”). Of course there are hotheads (Eddie, Eddie, Eddie, and when Michael Martin speaks, the seismographers in California know it). But all this remains within the usual limits of political discourse. It’s local policy. It’s invigorating, not alarming. This is the sequel to Tocqueville Democracy in America.

Where things go awry is when the elected Mullinsify and start drawing their poisons by sucking up the national talking points from the usual propaganda outlets and spewing them all over us as if one of them has the slightest impact on the silted rills and canals of the Palm Coast, better routes for the West Side or the average reading scores of Flagler students.

We live in a time where truth, facts, evidence, science have been reduced to opinion. Proof is what liars and inventors want it to be. And masses of people believe it. Stupor and stupidity can be a winning constituency, if handled with attractive dogma by shameless demagogues. Trump did not set the standard. He just unearthed an American deformity dating back to William Jennings Bryan, Huey Long, Father Coughlin, George Wallace, and Newt Gingrich, among many others. The social media sewers were the kindred spirits of Trump’s poison. Millions drank. Servants appeared. Namely: the stupid Mullins, The Woolbright, the McDonalds. They may have left. Poison dealers are certainly not.

Take Ed Danko, the so-called Palm Coast Councilman. He calmed down from his first year of impersonating a caudillo of his drugs. He does not appear to have insulted the children of ex-civil servants lately or spat such a colossal slander as he did on the former mayor during a council meeting, for which he never apologized. , or, to our knowledge, made employees feel uncomfortable at City Hall lately. Sometimes it even seems reasonable, almost brilliant.

But it’s still a troll stopped the board. He was a Mullins apologist until the very end (Mullins shoveled money at Danko’s Trump Club), he continues to shill for Big Lie Trump at every turn, which should be an automatic disqualifier in the eyes of voters since ‘he lies about the very system that got him in Desk. And I don’t know what happens after a certain hour, from the nightly shows he drops in the comments section of FlaglerLive (he’s since been banned: he didn’t follow his own boycott, let alone our commenting policy), but he seems to be in the grip of a narcotic more powerful than Fox News. Maybe he switched to OAN. Either way, he’s going to have to do a lot better to convince us he’s no longer a poison peddler.

I’m hesitant to include Christy Chong and Will Furry on the hawker list just yet. But their behavior in the campaign so far is not encouraging. They had their faces stamped on this bundle of lies that presented themselves as the real thing and Trevor Tucker, along with Sally Hunt and Courtney VandeBunte, as criminals “wanted for interference with parental rights” and pushing critical race theory and ” gender indoctrination”. It didn’t work against VandeBunte and Hunt, but it eliminated Tucker.

Admittedly, he took his victory for granted, which was incredibly stupid. It’s not 2008 anymore, Trevor. But he was the most genuinely conservative member of the school board, and he wouldn’t know the critical theory of a monk in Nepal. I doubt Furry and Chong will either. Yet they rode on what they should have exposed, making them poison peddlers in my book, so far anyway.

That’s before we get to their fake platform from the Moms-for-McCarthyism playbook. They know full well that the CRT-gender-parental-rights mantra is today’s red-baiting, a fabrication to solve a non-existent problem, the hissing fanaticism of all that aside. But whatever Trump clone they use to run their campaigns, read his Gingrich rating on how to use certain words when a) grandstanding is your thing, b) you have nothing to offer but cheap slogans and a DeSantis cap, and c) smearing the opposition can win you votes . That’s what this whole fake school crisis is about. I don’t think Furry and Chong had the ability to think about this – they’re no Gingriches – but they knew a good ploy when he fed them, so that malicious double-sided flyer went away.

Of course, they have all the freedom of expression in the world. But that doesn’t make their speech factual, ethical, moral, or responsible, and if they can’t muster those four qualities before they land a seat on the school board, where a little more is expected of them, they’re not than Woolbright redux. Participating in this celebration of love of illegal mentions at Parkview Church was also not a good example for children. Give them the benefit of the doubt. Maybe they’ll see the light, and I’m not talking about the messianic kind they burn our retinas with. Otherwise, the electorate will be no nicer to them than they were to other crusaders.

Tuesday’s election is not a turning point. It’s more like another temporary win for sanity. Flagler is getting much redder still because he’s getting older: There’s a direct link between the huge proportional increase in the county’s elderly population over the past 10 years and the increase in Republican registrations, and if that continues, Flagler could well be the next Villages and a breeding ground for the very kind of white nationalists, fanatics and liars defeated this week. Not yet. Poison peddler jobs can always earn positions, of course, and they do. But for now, it looks like Flagler voters will make sure they have an embarrassingly short lifespan.

Pierre Tristam is the editor-in-chief of FlaglerLive. Contact him by email here. a version of this piece aired on WNZF.