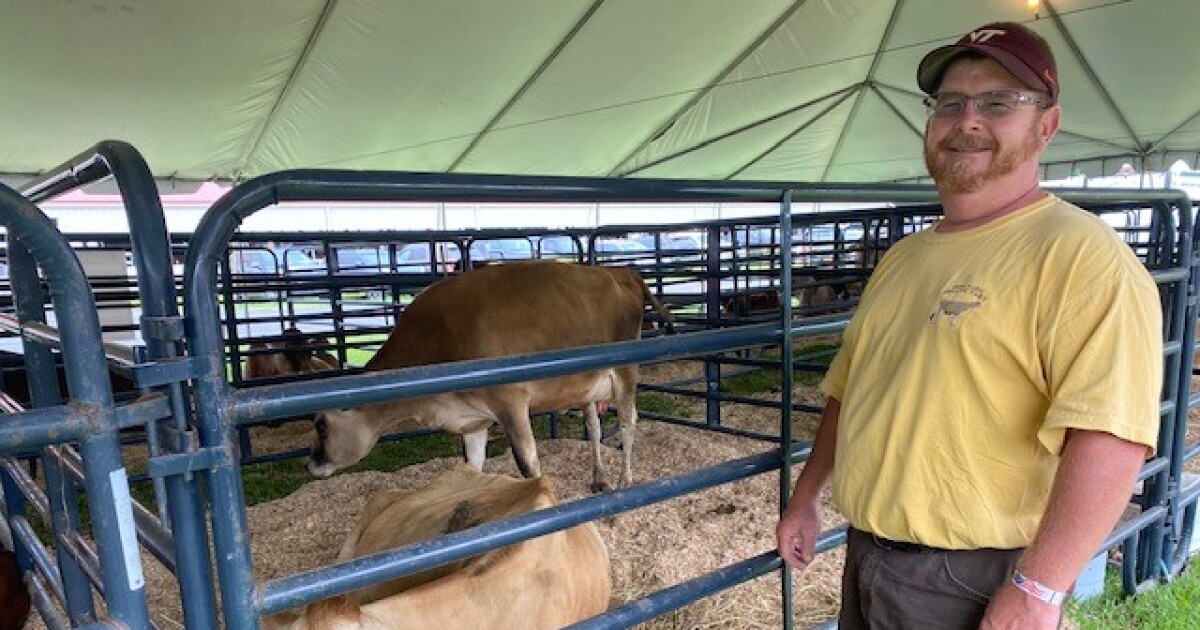 One of the most popular and unique exhibits over the past 10 years at the State Fair of West Virginia is the Dairy Birthing Center.

In a show barn with bleachers for an audience, 20 pregnant cows, all or nearly all of them, are waiting to give birth.

The Dairy Birthing Center Show Manager, Remington Perkins, is the owner/operator of Perk Farm Organic Dairy. He began raising 60 cows at his nearby farm in Frankfort, West Virginia last November.

“We try to play the odds game,” Perkins said. “We brought 20 of them, and as they calve we will leave some of the calves here for the kids to play with and bring the mother home, start milking them and bring in more pregnant mothers. “

Other fair activities happen on schedule, say at 10 a.m., noon, and 2 p.m. Perkins said there’s no schedule for the delivery, so he’s waiting for telltale signs to report a fairground-wide announcement.

“As soon as we see a bag of water coming out, we know she’s going to calve within the hour,” Perkins said. “Once that happens, we’ll call the fair announcer here, they’ll put it on the PA system and the crowd will show up.”

Perkins said the exhibit gives non-farmers a better understanding of where their food comes from. He had an explanation for those who get upset that they immediately take newborn calves away from their mothers.

“We explain to them that these cows are bred to give enough milk for 5, 6, 7 or 8 calves,” Perkins said. “If we only left one calf with her, the mother would get sick and the calf would get sick from having too much milk. We want the calves to think of us as mom.

Perkins is a third generation farmer; his family dairy dates back to 1942. He said that to survive in today’s corporate-dominated agricultural economy, the small dairy farm needs a niche, such as organic milk production.

“The Organic Valley is the company we sell our milk to,” Perkins said. “You can buy it at the local Walmart, and it’s made a huge difference on our farm. It is a fixed milk price and we know at the beginning of the year what we are going to be paid throughout the year. This stabilized our farm and allowed us to start investing in the farm again and successfully bring the next generation back to the farm.

When you’re at the West Virginia State Fair, listen to that AP announcer call the barn at the Dairy Birthing Center — and see something brand new come into the world.